“Our clients inspire me: The fortitude necessary to move on with their lives, and the motivation to prevent harm to someone else. These things drive me every day.”

Jon Moore grew up in the Kansas City, Missouri area where he earned his Eagle Scout badge and graduated as valedictorian of his high school class of 600. He attended college at Northwestern University, outside of Chicago. Following college, Jon got accepted to Georgetown University Law School but elected to defer his acceptance for a year. During that year, Jon returned to his hometown and taught English and Debate at a local high school. Jon continued to pursue his interest in teaching while at law school, by teaching a practical law class to students at a high school in Washington, DC.

Jon and Laura moved to Charlotte in 2002 when Laura accepted a position as a reporter at a Charlotte TV station. It was at that time that Jon began his legal career in North Carolina. Jon has been recognized by North Carolina Super Lawyers® magazine every year from 2012 through 2023. He currently serves as Vice President of Legal Affairs for the North Carolina Advocates for Justice, and has previously served as Chair of the Auto Torts and Premises Liability section, and Chair of the Products Liability section. Jon is a member of the American Board of Trial Advocates (ABOTA), an organization limited to attorneys with at least 10 civil jury trials, and served as Membership Chair for the Western North Carolina chapter.

Jon and Laura have their hands full chasing their two children around to a variety of youth sporting events. In the spare time he can find, Jon enjoys reading, exercising and cooking.

*The above are samples of representative cases in the areas in which Jon Moore practices. No representation is made that similar results will be achieved in your case as each case must be evaluated on its own merits. 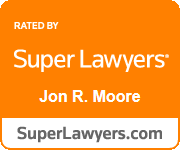 No Result, No Attorney Fee